" To live is to suffer; to survive is to find some meaning in the suffering."
"What doesn't kill you makes you stronger."
Friedrich Nietzsche

"Sometimes the best way to conquer your pain is to embrace it."
James, brother of Jesus

Most often life's true dilemmas don't get solved.  Rather, over time one loses interest in them and they simply fade into life experience.

The angel reemerges into the field of duality.  He is altered, his ego dashed and he is humbled but at the same time enlightened by presence.  Having entered to do battle,  the beast proves its invincibility.  On the other hand, the beast is now confined to two dimensioned reality of ego.  There is refuge in presence.  Presence protects by forcing an outward gaze rather than an inward gaze.  The angel  loses his arms to find wings.  The beast reenters the bush soul of the tree.  He is no longer a threat but only a reality accepted.  The bush soul is the mask of irrationality. 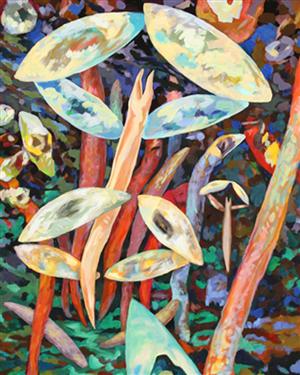 The Beast  has inadvertently and ironically been killed by blind allegiance.  Then comes the crash.  The mob is free of control but they are on their own, their Master no longer there to tell them how to think and what to do.  Like a radio signal without an antenna the only information being fed to them is chaos and undecipherable static.  Out of panic the frenzied individual begins to devour its own.  What will it take to regain peace and tranquility?  On their own and without purpose the individual cannot survive. 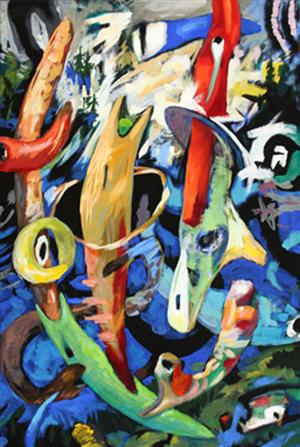 The beast is not dead at all.  The force of the strike only fragments the Beast of Fixation into so many more diversions from Presence.  The grip has

only tightened.  Two dimensioned thinking leads back to the same condition:  Ego.  Control by force of will.

The first paradox:  Pursuit of collective Presence requires the most individual of thinking.

Pursuit of individualism requires the least of individual thinking and instead, binds you to the collective One of self interest.

The angel it seems, has been abandoned.  The gossamer spirit of the earth is no longer required.  Self centered desires and the material world has crushed all that is sacred in presence and instead fixes our gaze upon two dimensions of virtual, invented ego.   So the abandoned angel seeks comfort and refuge in Mother Earth through entry into Her realm.  This portal is a Bush Soul.  Myth dictates that all humans are connected to a corresponding plant or animal that intrinsically ties them to nature and the circle of life/death.   The bush soul speaks of the eternal now in oscillating opposites.

Tree, is Nature's bush soul with its trunk a solid, positive form.  But its foliage, defined by two force rings lead the angel into negative, spiritual space causing a split of duality:  the inner sanctum of irrationality.  This feminine landscape with mountains of a vaginal profile and clouds of copulating pairs, leads upwards, again with two force rings forming the birth canal and continuing on into the fallopian tubes of Nature's sexual omnipotence.  Viewed in totality, what is revealed is the mask of Mother Earth Herself. 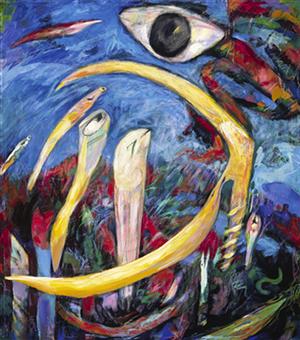 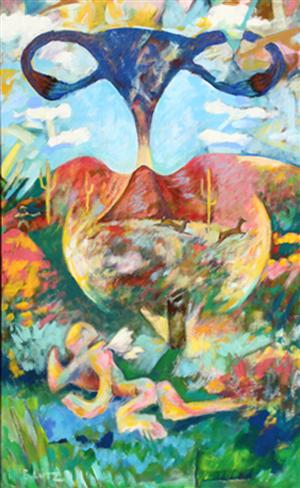 The similarity of fixations is that they are self perpetuating. Any fixation will do.  On without end.  Saving the world or saving your money.  Serving sexual desires or serving the Lord.  Feeding the monkey or feeding the poor.  Somehow the mind has it figured out if but for a little more emphatic or a little luck  or a little answered prayer.  But it doesn't come.  It doesn't materialize according to plan.  Every spin has its origin in ego, a past tense phenomenon making right the future.  To analyze an event it must already be past.  And to wit, the past can last a static eternity. Why me?  Why this?  Why now?  Curse the body.  Curse the deaf ear.  Curse the unrequited passion.  Curse the blind eye.  Infinitesimal worm holes, one and all.

The Beast has His pincers cocked, His eye has a mesmerizing command.  All of the minions in salutation to their Master, they  wish to be as one with Him and the Master wishes the same.  All the more powerful will be the hidden collective eye of the dominant One:  Of many, make one.

Round and round the spin.  The beast bores into the fertile ground of myopic focus which plant the seeds, which grow and are nurtured by inertia  and indoctrination to glorify and serve the one, the individual.  But by chance there is a mutation.  One newly released minion is ready to leave the nurturing field and attach to the beast as others have always done.  Yet, perhaps it was presence that spun the world just enough to alter the

trajectory and set it on a collision course with it.  The minion is about to puncture the eye and kill the Beast. 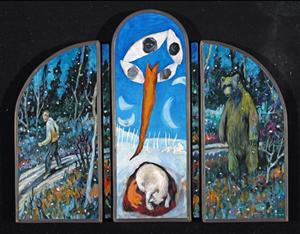 The Bear Dream
I run, I run through this fall moonlit night.  Down an unfamiliar Michigan two rutted dirt road and into the diagonal shadows cast in cool blue light.  As I pass into the darkness of the trees an image catches the corner of my eye and causes me to shudder.  A large dark beast, a bear standing, following my movement with dull, knowing eyes, those eyes which are well adjusted to the darkness and contemplate me with what I fear to be harm.  I have made a fateful mistake passing him, knowing that he blocks my only escape.  I let out a low moan for my scream will not come and Lisa shakes me awake from this nightmare.  The image does not leave me.  The bear beast on two hind legs, sloped massive shoulders, standing in the weeded edge of the road.  Silent and intelligent, how will he get me?  I dare go no further into  the darkness.  It may be an ambush.  There are more.  I am blocked on all sides.  Unknown.  Darkness.  And the beast.
1997

The center panel releases the irrational from the rational through the myth of the bear.  This myth of death and rebirth is supported by the fact that a bear gives birth to its young during hibernation.  A bear goes into her den in the winter and emerges in the spring with her cubs in tow.

Going blind complicates an artist's life.  It is also one of those sonic-boom bits of present tense spirituality, which beyond ego, must be embraced.  In ego, reason gives us everything from hope to denial to defeat.  Either way it is outside of the realm of presence and therefore a subjective interpretation of reality.   Still, like any good trauma, we want to beat it, kill it, cure it.  Many classical mythic adventures tell how a hero who, tasked with slaying some beast or dragon that threatens peace and tranquility, enters into another field to do battle, but it is ultimately he who dies to that beast.  And it is he instead, who reemerges transformed.  So it is that, blindness now the dragon faced,  it is spiritual presence itself that is the beast.

The Beast series dissects rational/irrational duality and descends into its irrational component alone.  Dreams, intuitions, coincidences, any number of portents occupy and transform in presence.

This series starts with a bear dream.  Over the course of successive dreams other animals insinuate themselves in.  Then simply a specter overpowers, wreaking havoc on the night.

It is as if a bush soul of some nature beckons and lures like the sirens of old.  It is impossible to resist.  Without reason as a guiding light, any thought may suddenly turn into a black hole, spiraling down without end.  Like desert spiders setting their trap, the harder its prey scurries upward to safety the sand keeps falling lower and faster, drawing the hapless unfortunate into the spider's jaws.  It is in this formless landscape that the beast and the confrontation are found.