Above, two people stare over a landscape of their lives in stoic resolve of their chosen paths.  Below, predelles reading left to right:   Uncertainty, Persecution, Endurance, Faith, these are forces that drive the individual/collective dual.

Nirvana is the reunification of the physical/spiritual dual.  Physical man is held in a suspended dive in his effort to reunite with his spiritual mate.  The flowing, living river now a rocky shallow could prove lethal to his attempt.  The single bush in the center alludes to the Constant. 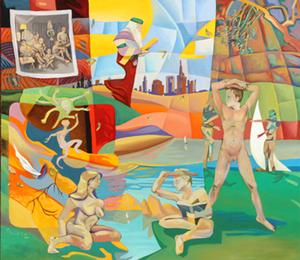 Thomas Aquinas believed the age of reason begins at twelve.  This marks the transition from collective child to individual adolescent.  For a few precious years the adolescent is in natural synchronicity of self interest and discovery is the only order of the day.  It is vital knowledge that will support a successful adulthood when once again, collective responsibility prioritizes.  In this scenario a child's mind comes naked to the world, ready to take sail into the great unknown where any number of influences stand poised to be embraced.  Like seeds of a maple tree which scatter in the wind, the boy looks beyond to a future of sexual energies and other forces that drive which will cause his own boat to lay anchor, plant seed to take root and flourish.  As a collective spiritual man, he will be guided by the many hands of his musings.  Of course, authority and dogma  always hover, in order to influence and mold the individual.

A single predella shows a pinned photograph of his youth.  One independent child, the individual thinking child, poses upside-down.  The adolescent moment when individualism commences. 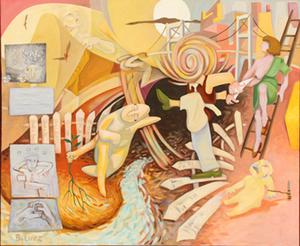 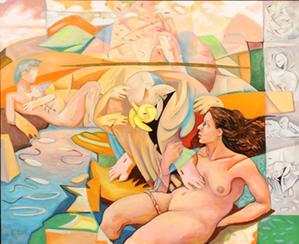 Christ is crouched in a birthing position, the umbilicus tied to his mother's womb. Jesus gives birth to an idea,  allegorized as a fetal-child (the same figure in Crucifixion) issuing forth from His womb.  The Godhead, in the upper left corner, reclines along the bank of a river and by His touch produces the seed from which the idea originates, the meeting of time and space with the spiritual Constant.  The stigmata

on Jesus' hands and feet allude to the repercussions of original, individual thought.

The theme of Nativity is whether Jesus was enlightened by an external Divinity or whether he found Divinity in Presence and within Himself.  In the Garden of  Gethsemane, it is told, He suffered a moment of doubt in faith.  If God had Jesus' back, there would be no doubt.  But suffering doubt is suffering self doubt. Although spiritual nature of Presence is realized  through the individual, it is in  Presence where his tie to the Spiritual Collective is realized.

Predelles read from bottom to top:  The scene  is repeated as an idea born.  There are footprints on the ground showing that it is not hallowed ground, everyone has the capacity for profound thought.  Next, the idea is nurtured. Third, the idea matures and finally, the idea lives on its own.  Flesh and blood come and go, it is awareness of Presence that transcends time and space.

The strip  of gold leaf represents a demarcation of where the metaphor ends and Presence continues. 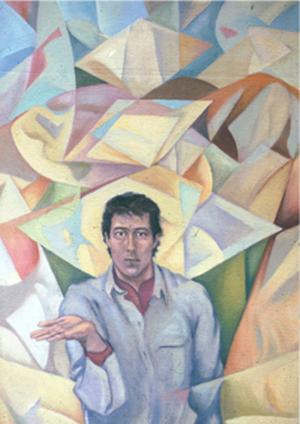 Self Portrait in Nevada

Spiritual want in a material world.  Material want in a spiritual world. Another collective family paradox in present tense absorption, requiring individual effort to nourish the other.

This painting is constructed of painted panels, leaded glass and shaped in semi Gothic design to further enhance the iconic and spiritual message that history, tradition and landscape together impart. 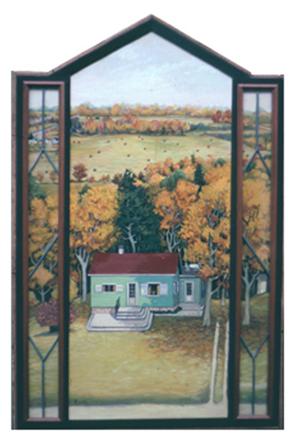 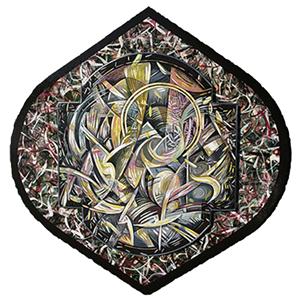 Having found dual emotional realities  within the landscape, it is a natural next step to isolate them from visual appearances, in which to further explore their nature.  Taking the cue from earlier work of ascribing visual representations to chaos and to order, this painting puts each upon their own physical plane, with the upper leaded panel transforming toward an orderly construction.  Within this transformation rises human, intelligent thought and philosophy as represented by the arc of gold leaf hinting at the halo of Jesus and more profound spiritual realities. 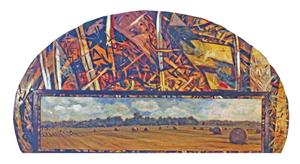 Of three different realities represented here, two are subjective moods. One, an idyllic scene of hay bales in a field, moving in panoramic along two vanishing points, prompts the eye to move in real time along the pastoral setting.  The other subjective emotion is housed in the chaotic, multicolored mood which pervades the outer field.  This juxtaposition is enhanced by a third geometric dimension rising from this outer emotional landscape, reminding the viewer of physical three dimensioned space which accompanies both realities.

Lost in a fantasy of daydream, in the land of his father's mother's father, lurks youthful memories passed, constancy, ritual of family, oral tradition.  Smells of burn-pile ashes, mold and rot and decaying leaves.  Autumn in the hardwoods. Deer grazing in the pasture near the color drenched forty acre wood.  Where wild turkey and enigmatic red fox take their leisure down the two rutted trail leading to the other road, this one paved going north and south.

Long removed but returning as prodigal son, the Leafraker is immersed in ideals of windblown fates and felicity.  The open air theater prods him to reconsider himself, his importance and his insignificance to the ever changing whole.  In Presence he tends his garden by raking the leaves from his path. 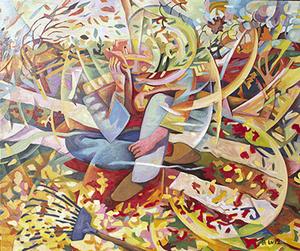 Stark changes of scenery force a reassessment of location's influence upon spirituality. Terrain is different, weather, flora and fauna all different.  Seasons impose different realities upon our actions.  Solitude of open or wooded spaces influence perspectives.  Sharing the environment with wildlife and observing nature more intimately, all play a role in how the here and now experience is received.

Also influential is the history acted out on this land.  From the Oregon ocean shore vista, say, the ocean itself appears as its own entity and seems oddly indifferent to human activity.  We observe it and ride upon it, move through it and take (and take) from it, but history does not readily show itself.  This is different upon land which we dwell and increases as one travels eastward across the country, through human history and its attendant timeline.

In this regard the rundown homestead of Michigan quite oozes with reminders of other lives and their toil, while beneath that layer is the unavoidable reality of an erased earlier native history and its tragic and bloodletting story.   All are present in arrowheads and Indian names and stump fences and weathered or delapidated farm buildings.

The hold of the land and its past requires a new lens by which to experience and explore spirituality.  Reverence for the land and history is inherent.  We pay homage by iconifying an image thereby giving spiritual significance to what we hold dear. It is an attempt to possess the intangible.

In our story, as paradox dictates, duality appears in full force.  Amidst natural beauty and open space solitude and serenity, is coupled with intense financial and emotional discord.  It is as if one cannot be perceived and appreciated without the influence of the other.  As present tense spirituality goes, the experience given is the experience taken. 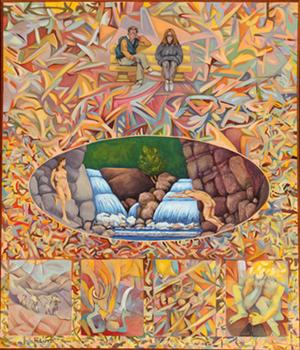 This is a paradox of collective responsibility and self interest in reverse.  Individualism smacks in the face of the corporate collective mindset where all are but cogs of a large running machine.  This machine is not collectivism, it is control of the many in pursuit of self interest.  It is the collective of a corporate Singularity. To this extent, the smaller unit of family collective is actually sacrificed, fragmented and isolated at great cost.  Family, the small unit which gives meaning and purpose to the individual, is skewed.  Attentive love is replaced with impersonal material comfort, immediacy with absence and isolation.

A headless, swirling leviathan bears forth the system which stomps hard on individual will.  Rows of fence railed individuals lay flattened by the force.   A repercussion results in a fracture of the family.   Nurturing Mother  forced to work, sacrificing her breast milk to the system and separated from her child/mother collective bond.  The one who resists by clutching the fragile flower of his ideals remains immovable.  It is made possible by the third hand of present tense spirituality.  Predelles on the left read top to bottom:  sleepless in the middle of the night; uneasy sleep; awake in the morning with four things on the mind; wringing of hands over the stresses of the day.  Behind this, the collective spirit of nature is under assault.