One of the migrating birds, the Shearwater spends extended periods over water.

They fly in units of graceful singular and collective movement.  Their

relationship to air and sea is intrinsic, revealing the connectedness of all life

birds to clouds, the same form transformed slightly to allow their uniqueness,

shows this participation in the life cycle of collective existence. 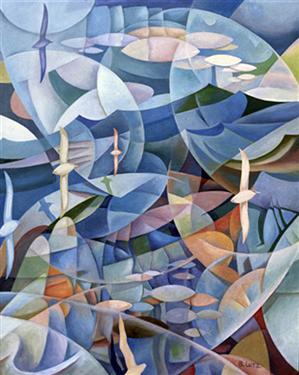 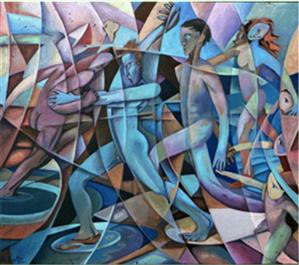 An isthmus is a narrow strip of land connecting two larger bodies.  It is a

razor's edge by which the collective-individual bond is held in balance.

Discipline and desire, the edge itself.   Virtue illustrates a commitment to the

collective, while defending a staunch individualism.  Paradox reveals that only by

committal to the one can you achieve the other.  The alternative is a single

entity in perpetual search for its opposite.

individual, prepared to check any antagonist.  The constant of the moon is now

replaced by the muse figure (center) as collective's dual, in singular,

individualistic resolve.  Allegorized forces push against him.  He rebuffs them

not with a fist but an open hand as his spiritual response.  Force rings pervade

the landscape in oscillations of opposites, as the forces unseen yet accepted, 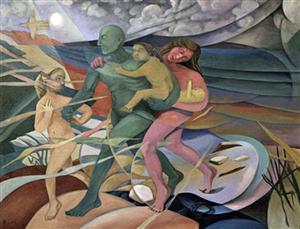 Lust is the first indication of paradox inherent in individual/collective

oscillations.  Strive for one and you get the other.  Either direction.  Strive

for love and unity and you are inundated with self pleasure.  Strive for self

pleasure and you are bound to the emotional responses of another.

The two central female figures illustrate the dilemma for the blue man.  For

though he tries to shield himself from inclusion, the lustful self-centered act

(on right) will result in realities of a communal nature (left pregnant figure).

The inverted figures above each female represent these realities: the right,

figure imagines giving birth.  The joined figures above the blue man are the

constant reminder of the forces that drive.  What are now referred to as force

rings, pervade the landscape and represent "all that exists which is unseen." 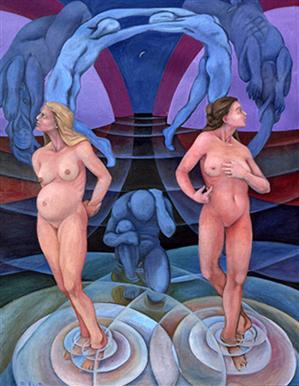 The force of passion is a primal force toward collective thinking.  The sexual

self sufficiency.   Here, the two figures embrace in an attitude of pursuit and

submition, two individual entities forging a single unit.  But not simply  in

coital intent, there is a locking of emotional states in a single purpose also.

made.  It is beyond rational or logical reflection.  It is present tense, kinetic

The scene is filled with symbolic representations of this.  Waves are fluid and

symmetrical, moving with and against the shifting sands.  The couple, bathed in

their own inner light, stand in a tide pool which has separated from the ocean to

become its own creative force.  A flock of Sanderlings fly  just above the shore

the natural order, and the crescent moon shines once again its constant reminder

of the unseen forces that drive. 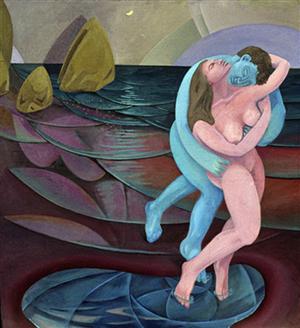 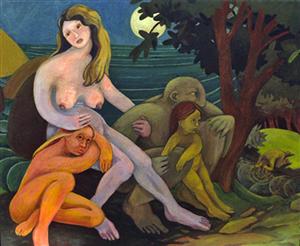 The composition is a family portrait in collective mode.  Father as thinking muse;

child as instinctive dependence. The woman's hand on her womb in total, natural

synchronicity with the as yet, unborn child.

The landscape is harmonious also with symmetrical arcs representing tidal and

river flow  in a dance of opposites.  The moon represents constant, unchanging and

greater forces about us: physical forces of gravity, centrifugal, nuclear and

magnetic forces. The social forces of predator or prey, want and desire. Inner

forces of love and belonging, spiritual and communal bonds.   All present but

spirituality, directs the figure leaning into the stream to anoint himself, as

yielding to all of these forces.

If spirituality is to be found in presence rather than in the dogma of glorified history or  future hope, then  life experience in presence is the place to begin.  Love is tangible in the here and now, all senses of the body connect with its aura.  We can see love in our eyes.  We can touch love in the flesh or hear it in our voices or smell the scent of love in bed and taste it at the family dinner table.  One may dwell on love's meaning their entire life and never find clarification.  Or one may live it.  Spiritual symmetry is the absorption and assimilation of our feelings as they happen.