Wolf, wearing the mask of its predatory nature, assaults Earth and her bush-soul, Tree.  Two-dimensioned realities insinuate themselves into multi-dimensioned nature, quite possibly tripping Her up.

Earth Christ appearing in dual form as deity and beast. 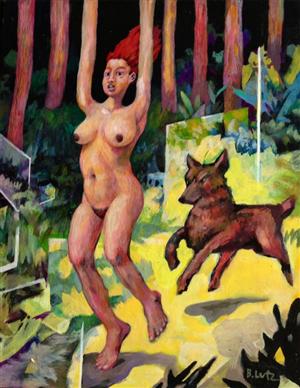 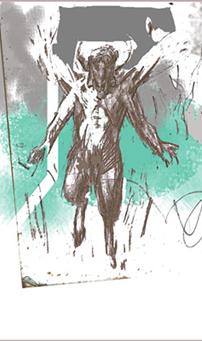 At the intercept of Presence are forged opposites of duality in the rational landscape of space and time.  At right angles human contact attempts to render a two dimensioned interpretation of it.  Three different raised panels hint at physical space and different levels of transformation. 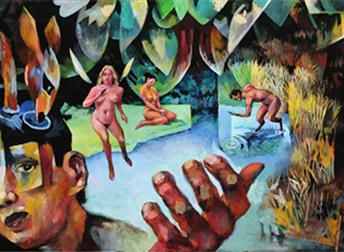 A vision of human symbiosis with spiritual Presence. 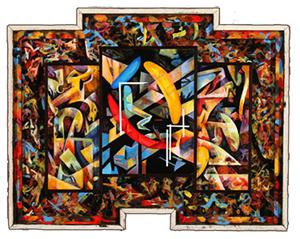 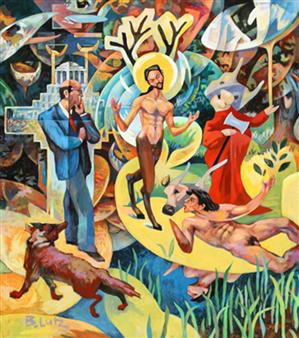 The Corporate Christian considers the sermon of the Earth Christ.  Symbolism of the top left:  You cannot duplicate sacred life once profaned.  Right: The act of killing is sacred and inherent in the circle of life.  The act of killing is performed with life's continuum as the guiding principle.  The tamed wolf of European mythology warily circles the two dimensioned mind of Corporate Christian Man. 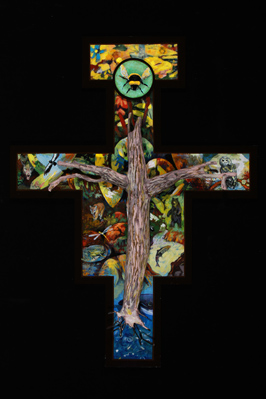 The shape of the crucifix is fashioned after the rood cross of San Damiano, the cross before which St. Francis of Assisi was praying when he received the commission from the Lord to rebuild the Church.  The cross is of a type sometimes called an icon cross because besides the main figure, it contains images of saints and other people related to Christ's crucifixion

The central figure is the Rood itself, manifest in the bush-soul form of Mother Nature.  The related saints are endangered species and their environments.   Bee amongst flowers, stands sentinel as the manifestation of symbiosis and coexistence. 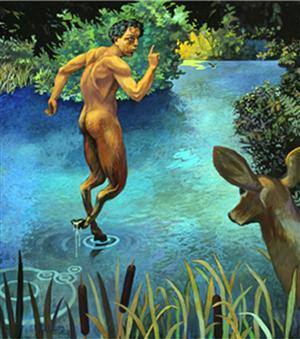 Earth Christ in early, early morning
intends to cross the lake
lightly steps upon the water
hoping none are yet awake.
In the brush along the shore
a young doe there to drink
pauses to see him passing by
this man-beast in perfect synch.
Besus (we shall call him)
cautions the doe in a whisper
the world must not yet know of him
then bids the holy spirit kiss her.
Has he come to save the wilds
or prepare for its demise
the doe continues with her drink
she does not seem surprised.
In her realm of existence
thought is not vital or advantageous
the earth provides her sustenance
and has done so throughout the ages. 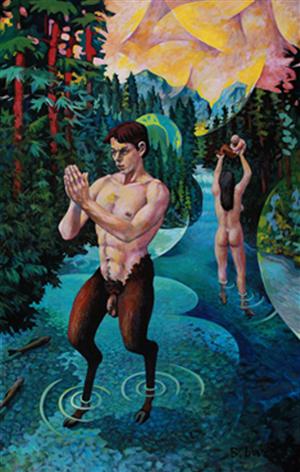 In a Forces Landscape the Earth Christ begins his ministry under the full force of 'sexual omnipotence of nature'.  He has mated with Woman to create a new mindset, one in synch with all life manifestations through Presence.  The symbolic fish of  primitive Christianity hovers close in unity with the mission.  The Earth Christ's halo emanates from the trees.