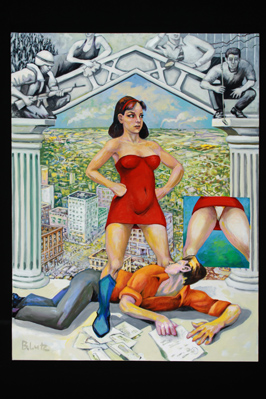 As the sirens of Greek mythology lure the unsuspecting traveler into a seductive snare of peril and potential demise, so does the capitalist siren of materialism and fixation of wealth-as-identity lure the masses into a trap of endless debt and servitude to titans of finance and capital.

The monument under which the siren stands, pays homage to 911, or IX-XI:  History begins here for most officialdom.   On the upper right represents the moneyed class in leisurely pursuit of self satisfaction while the left figures represent the consumer class, corn fed and protecting the elitist system by their own ranks.  The male figure below, lying prone to the siren and her appeal clutches bills of debt and servitude and yet still sees only the titillation of what is offered. 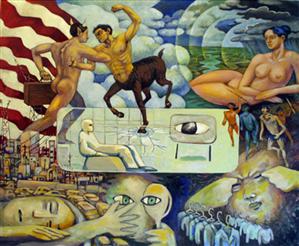 The final dithyramb explores what may be the last chance for our primitive, natural harmonies to coexist in the environment. This song tells of how weare asleep under the spell of consumerism but if we could only see ourselves from the other side of the mirror, outside of two dimensioned reality, we would awaken and free ourselves from its dehumanizing and destructive trajectory.  The earth goddess reclines in the upper right corner emanating force rings to counter the rational split of corporate logic.  Primitive man runs to join the struggle with Dionysus against the corporate beast.  Unfortunately, like alabaster stone we are affixed to our delusion and mesmerized by the collective One of two dimensioned reality.  The corporate aggressor is at war with primitive harmonies of Nature and mean to do her in.  The glass ceiling is cracking and yet we remain indifferent or oblivious. 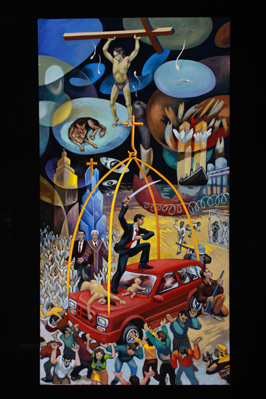 How did spirituality get corporatized into two dimensions of ego?  From the rise of the merchant class in the late Fourteenth Century, dominated by families like the Medici of Florence, spirituality came under the influence of money and personal agenda.  By the time of the Dutch Reformation of John Calvin (Calvinists) in the Late Sixteenth Century corporate Christianity had its place.  Whereas before being poor was a virtue--"It is harder for the rich man to get to heaven than it is for a camel to pass through the eye of a needle", now to be morally righteous was to be rewarded materially here on earth.  Conversely, as the doctrine evolved, to be wealthy inferred that you were morally and righteously superior and meant to be in the position of authority.  How convenient for the money class.  At the time the Dutch were the undisputed masters of world trade and commerce.  Corporate charters came of age here.

The gilded cage of consumerism is supported by the masses and defended by the sword, regardless of consequences of ruined cultures and environmental devastation.  The top right corner shows the World Trade Center going up in flames and releasing the beasts of destruction.  One beast pushes down under to where the oil tanker fills its belly, then curves back upwards as progeny, pushing up and up until the beast becomes a penis spewing sperm into any idea that it can inhabit.  We are always reinventing Christ to suit our own needs.

There are two modern forms of governance in American culture:  the conservative, Strict Father model and the progressive Nurturing Parent model.  The first prescribes an individualist authority instructing one how to behave..."we know what's best for you so do what you are told", while the other model prescribes consensus and collective thinking..."let's discuss our problems and arrive at cocompromise."  In the scene described, our nurturing parent has been splayed across the hood of the car and her child is climbing up to join the fray. 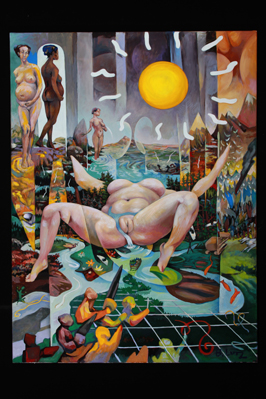 The sexual omnipotence of nature is represented here with earth and sun in elemental copulation, further nurturing even more complex and intimate reproduction.  But below where humans have graphed and bounded nature into two dimensioned reality are split from the oscillating duality of balance and instead, into a discordant pursuit of consumption and a destructive assault of the earth.  In collective Corporate Singularity nothing has value unless it is dead.  Duality is split into its rational component

A dithyramb is a chant sung to the god Dionysus of Greek mythology, the god of wine and song.  But this Deity is more complex, representing the primitive nature of man.  This series is the song of the beast to the earth.