In the end, with all dogma floating hither and thither, there is only the wait.  Life after death?  Heaven or hell?  Wait and see.  So much precious time spent in expectation.  Life goes flitting like an unnoticed butterfly, subtle delights of a passing day gone unnoticed, sounds of insects and birds and children and rustling leaves not heard.   Signals not read, gut feelings ignored.

Jesus the message is kinetic,  Jesus the messenger, is  idle speculation and  hero worship or adulation. An icon to be possessed.   Christ in dogma becomes the same Golden Calf that so pissed off Moses.  The difference between spirituality and religion is a matter of motion.  Spirituality is kinetic and now.  Religion is passive, past leaning for validation, bowed to the future with hope and prayer.

All institutional thinking is clearly fenced off and held at bay.  Their agenda is stifling to the kinetic spirit of life.   Spirituality is the individual manifestation of collectivism.  Religion is a power structure of the false, collective singularity. 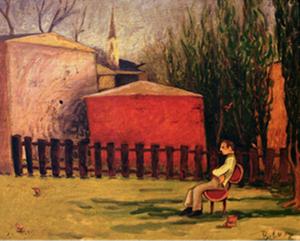 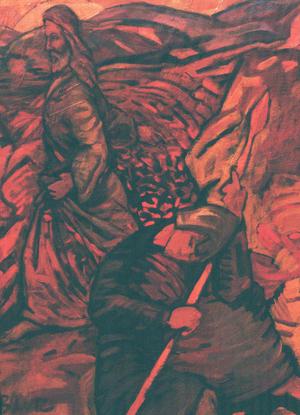 Raising of the Dead

In the dreamy aura of death and life, the penumbra between wake and sleep is an odd composition of two.  Dual realities square off in a dance for dominance.  Christ walks from the tomb while the sentry sleeps.  A perfect scene of the beginnings of faith. 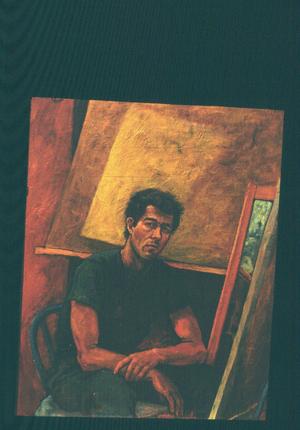 What a paradox to have been painting a storyline which climaxes in torture, evil and death, while having just been given the gift of life in infant form!  Dogma has no importance in this.  History feels old and reflective and redundant, while before this man is a family, wife,  youthful innocence, love and kinetics.  Which holds sway, that which is  decreed or what is felt?  Searching and sifting through all that is given, decoding dogma and agenda, all assimilate to become an individual in the context of here and now. 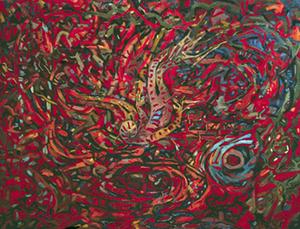 It was asked to a priest once, "What is the official stance of the church in regards to the three days between Jesus' death and resurrection?  What was He doing in Hell?"  His best guess was that Christ was more or less standing at the gate calling out the lost souls in a kind of victory lap.  But that interpretation appears too egotistical.  If instead, the here and now and the hereafter are one and the same eternal, possibly, he was decomposing into the great collective cauldron in order to be reconfigured again as a living universal entity.

Within this field of red honeycombs, Jesus, upside down,  separates into pools of opposites which rise separately to form DNA in the double helix above.

That which you feed off in life, feeds off you in death.  We become our own judge and jury.  In Christ's case, He fed from love and peace, not from the pursuitsd of desire and gain, which saved him. 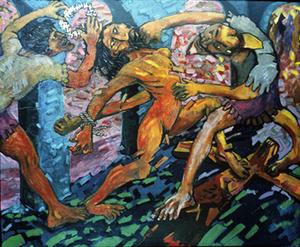 Tribunal is an account of the hours between Jesus being condemned to death and the march to Calvary.  Jesus takes a roundhouse blow to the face, shattering and splintering both his body and metaphorically, the entire landscape.  His body breaks as easily as any fragile life form.  But the eyes remain transfixed onto what is not so easily broken.  Collective-singular man comes down on the individual for entertaining unique thought, especially that which exposes the falsity of collectivism as a singularity, or doctrine.

This display of violence meted out as officially sanctioned justice reveals the perverted and sadistic thrill on display when one is given permission to act on what is possible in us all, our tendency to gravitate into the collective singularity where an individual does not have to think for himself.    In the upper right corner the accusers are filing out and away so as not to be sullied by the reality of their actions.  Singular (inspired) collective man has condemned; the individual hand of this collective singularity acts. 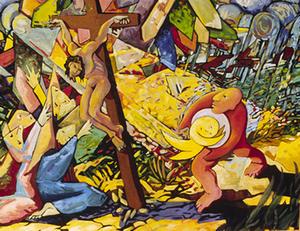 The cross heaves forward by the pull of those who would call him Savior.  But his gaze instead is fixed upon the small and insignificant process of life's continuum.  The small, humble act of giving a child to a woman and man speaks to eternity equally as much as does death's mystery.  It is from two, become one, that commences the collective nature of spirituality.  It places here and now, rather than the hereafter, at the center of spirituality. 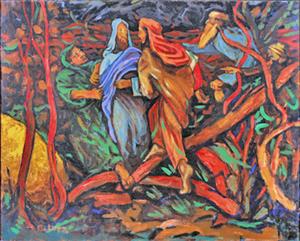 The rational landscape is obliterated but for jagged sticks and heavy, immovable rock.  Under cover of deep night Judas comes to give the kiss which will betray Jesus while he is handed a pouch of silver coins from the accusing Pharisees.   Peter pulls at Jesus to entice him to flee, but instead He gazes directly into Judas' eye and meets his fate.  What is the crime exactly?  An individual opinion about collective responsibility, contrary to the collective authority of individual power.  This is a bastardization of true collective.  This is a  "Collective Singularity".

Conception presents a conundrum of the role of lust within a commitment of collectivism.  There is a spiritual compartment for passion and its selfish drive for fulfillment.  The collective cannot flourish without the self centered pursuit of sexual pleasure and so no attempt is made to remove the sexual act from the Christian story line.

The nude figure lies upon a sheet resembling the shape of a cross.  The vibrant red chaotic background, along with the sultry attitude of the woman illustrates this tension of sex and spirituality. 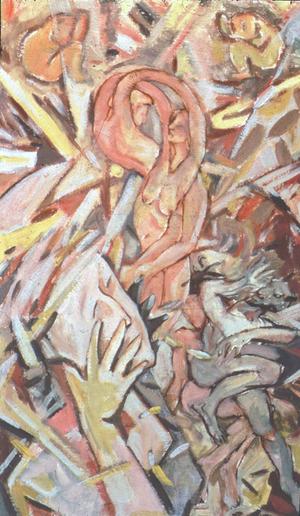 Baptism is a purge of all previous understanding as one moves beyond self and so commits to the greater whole.  A coupling of man and woman, to realize the physical birth of a child, now becomes a spiritual act.  Two fetal images in the top corners represent both spiritual and physical birth.  The demon cast out in the lower right is a phantom still holding to dogmatic beliefs of washing away sins and victory over evil.  Instead, naturalness of the sexual act becomes sacred and the duality of its effects revealed.

Washing of the Feet

Washing of the Feet is concerned with the dual individual responsibilities of the collective. Three examples are cited: 1.The slave woman washes the feet of her Master while Jesus serves to the slave all things spiritual.   2.The boy tends to his beast of burden so in turn the beast may serve the boy.  3.Humans  toil and  care for nature and nature provides manna in return.  The landscape is obscured to the message and begins to break apart.   Appearances offer little clue to the spiritual realities beneath. 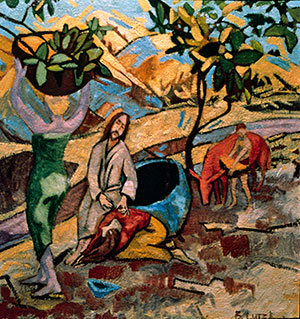 Blue Man idealizes the mother-child bond in a framework of natural rhythms and religious mores.  The man takes on a supporting role as self interest yields to the greater whole.  A man provides for the family while the mother provides for the child.  But a dilemma arises within the man.  Must he lose his identity to fulfill his requirements?  The total immersion of selfishness enjoyed in his youth is now subjugated, but primal urges continue unabated.  The blue man prefers aloneness while he considers the paradox. 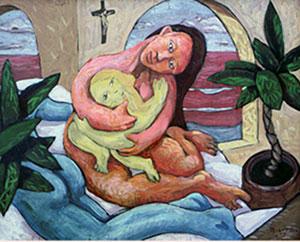 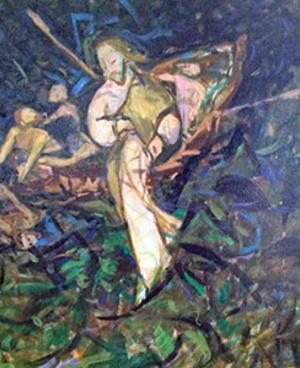 Walking on the Water
oil/canvas

The story of Christ walking on the water has two versions in the New Testament.  One has the disciples in trouble on the water and Jesus comes to their rescue.  The other, which concerns this piece, has Jesus intending to slip by them unnoticed but is spotted while they struggle in turbulent waters and fearing for their lives.  The painting shows  the men in this attitude of anguish and fear.  Peter implores Jesus while his hands point to his own reflection, consumed in his own panic of self preservation.  This painting then, is concerned with uncertainty and doubt in stark contrast to the supreme faith of Jesus.

To commence examination of one's own spirituality is to first identify the dogma that has been the guiding force up to this point.  Christianity is filled with iconography and traditional literature so ingrained into Western thought as to render it veritably absolute in its interpretation.  To question the authority of the bible is to risk accusation of heresy and castigation from one's peer.  On the

other hand, it is very difficult to bend one's personal and unique experience into such a rigid structure without losing sight of one's unique position as a spiritual person.  To this beginning is the conflict of faith to individuality.