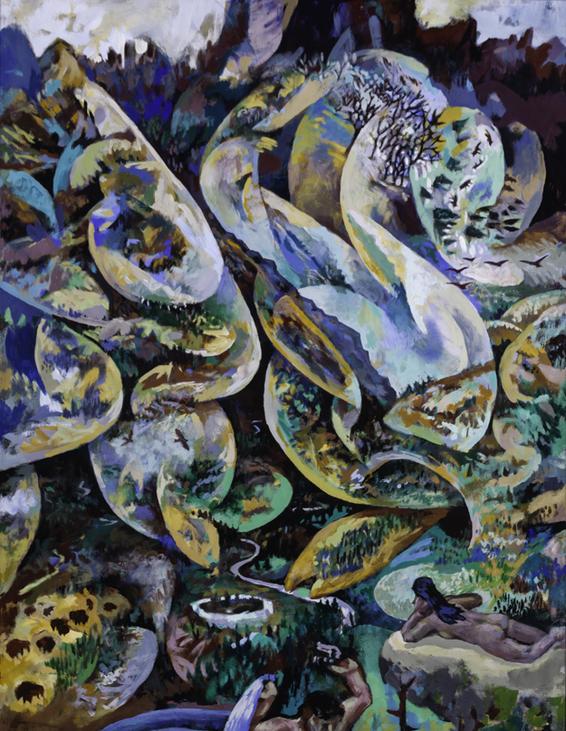 The body of work gathered here spans a career of 30 years of mature thematic painting.  Taken as a whole, the art reflects a sustained examination of spirituality and present-tense collectivism.  As a vehicle, this theme is moved forward within the paradox of duality.   First of these duals is the individual/collective paradox manifest in the sexual drive.  The sexual drive is defined as a singular pursuit of forming a pair.   Using Christian dogma as a springboard beginning with the Christ Series, the work progresses through nine separate and distinct themes from the different vantages of:

The sequence proceeds forward from conclusions drawn from the previous series in a cause and effect logic.   So that if I could not find true spiritual nature from the teachings of man say, where else might one look.  And so on.

Of course, we can only gather evidence from our own life experience so certainly the work is autobiographical.  But throughout, there has been a conscious effort to sift out particulars of experience and whittle it to its more essential and universal components.  In that regard nudity pervades the work for the same purpose.  If the painted figures were in the fashion of the day for example, the metaphor gets snagged on a point in time.  Spiritual nature is beyond time.

Another point worth mentioning are two keys in the visual vocabulary.  One is the use of what I call “force rings”.  They are the symmetric arcs that pervade compositions after 1987 which represent “All that exists which is unseen”.   They were discovered in the undulating rhythms of ocean tides in tug and meld with river flow.  The other, chaotic hash marks, serve to highlight discord and contrast to perceived spiritual harmonies.

Also, the work tends, from an early fascination with primitive art, to dispose of accurate perspective.  A flattened format transcends space and time.  All things viewed at the same time but in different context is not possible in our temporal field.  As an adjunct to this flattened view, is made use of “predelles” in some of the work.  These small paintings within the image are used to describe the main theme.  They may be day-in-the-life sorts of images which describe different but simultaneous events, or expanded aspects of the larger theme.  Or they may provide different vantages or perspectives.

Painting in themes began quite by accident.   Soliciting my fine art portfolio in Los Angeles, more than a few times I was asked if I painted in series to which I admitted I did not.  For several days I brooded over why that seemed to be a prerequisite to any interest in the work  and in my naivety concluded that it must be to discern whether I could carry a thought beyond a single canvas.   I decided to pick a theme to focus upon.  Being a mid-western Catholic boy although a non practicing one, I figured that no one had the inside track on faith.  I had always been innately thoughtful of life's beauty and mysteries but religion had become too cumbersome and restrictive in its dogma to satisfy the inherent irony and contradiction of such a theme.  At any rate, my new wife was pregnant and where better to parallel God and mystery than in the context of the gestation and birth of my child.  This event then, provided the gambit move into a quest that has not ended.
William C. Lutz

The series, listed chronologically, are intended to be viewed and read in sequence.

Begin at  'Series Paintings' above